THIS SITE IS INTENDED FOR U.S. HEALTHCARE PROFESSIONALS

The effect of VAPRISOL on serum sodium was demonstrated in a double-blind, placebo-controlled, randomized, multicenter study in patients with euvolemic or hypervolemic hyponatremia (serum sodium 115-130 mEq/L), the primary efficacy endpoint of which was change from baseline in serum sodium during the course of treatment, measured by the baseline-adjusted area under the sodium-time curve (AUC) from the beginning through the end of treatment. Fluid restricted to ≤2.0 L/day in all patients. The mean baseline serum sodium concentrations in patients treated with VAPRISOL or placebo were 123.3 mEq/L or 124.3 mEq/L, respectively.1,2 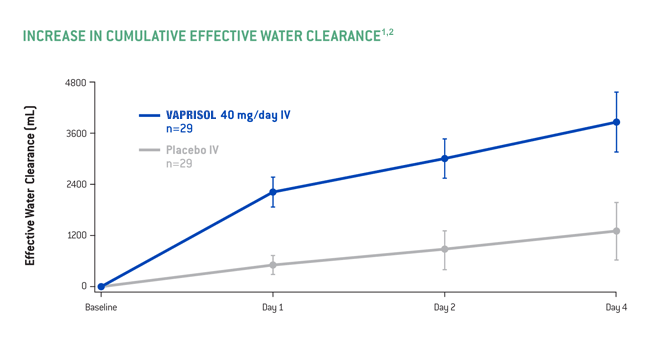 Indication: VAPRISOL is indicated to raise serum sodium in hospitalized patients with euvolemic and hypervolemic hyponatremia.
Important Limitations: VAPRISOL has not been shown to be effective for the treatment of the signs and symptoms of heart failure and is not approved for this indication. It has not been established that raising serum sodium with VAPRISOL provides a symptomatic benefit to patients.

WARNINGS & PRECAUTIONS
Hyponatremia associated with heart failure: Safety data on the use of VAPRISOL in these patients are limited. Consider other treatment options.
Overly rapid correction of serum sodium: Monitor serum sodium, volume and neurologic status and if the patient develops an undesirably rapid rate of rise of serum, VAPRISOL should be discontinued. If serum sodium concentration continues to rise, VAPRISOL should not be resumed. Serious neurologic sequelae, including osmotic demyelination syndrome, can result from over rapid correction of serum sodium. In susceptible patients, including those with severe malnutrition, alcoholism or advanced liver disease, slower rates of correction should be used.
Hypovolemia or Hypotension: For patients who develop hypovolemia or hypotension while receiving VAPRISOL, VAPRISOL should be discontinued, and volume status and vital signs should be monitored.
Infusion site reactions: Serious reactions have occurred. Administer through large veins and change infusion site every 24 hours.

DRUG INTERACTIONS
Potent CYP3A inhibitors may increase the exposure of conivaptan and are contraindicated. Generally avoid CYP3A substrates. Exposure to coadministered digoxin may be increased and digoxin levels should be monitored.

USE IN SPECIAL POPULATIONS
Use in Patients with Hepatic Impairment
In patients with moderate to severe hepatic impairment, initiate VAPRISOL with a loading dose of 10 mg over 30 minutes followed by 10 mg/day as a continuous infusion for 2 to 4 days. If no rise in serum sodium, VAPRISOL may be titrated upward to 20 mg/day.